From Cornelis Drebbel
Jump to navigation Jump to search 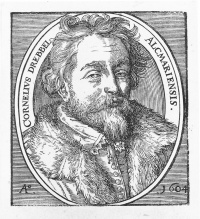 a Bold mind, a show-off to the World

Cornelis Drebbel born - probably in the year 1572 - in the city of Alkmaar (Netherlands)
at Dronckenoort in the second house from the corner of the Huigh-de-brouwer steegh.

The Edison of his time; Brilliant empiric researcher and innovator, Drebbel’s constructions and innovations cover in particular measurement- and control technology, pneumatics, optics, chemistry hydraulics and pyrotechnics. With Staten General he registers several patents: writes some interesting essays about his experiments with air pressure. Makes beautiful engravings; the subject The Seven Liberal Arts and a map of the city of Alkmaar.

Measurement- and control technology / pneumatics: Famous for his Perpetuum Mobile, builds and navigates with a submarine. Builds an incubator for eggs and a portable stove / oven with an optimal use of fuel, able to keep the heat on a constant temperature by means of a regulator / thermostat. Designs a solar energy system for London (perpetual fire), demonstrates air-conditioning, let it rain, makes lightning and thunder ‘on command’, develops fountains, fresh water supply for the city of Middelburg. Involved in the draining of the moors around Cambridge (the Fens). Develops predecessors of the barometer and thermometer, the "Drebbeliaensch instrument", harpsichords that play on solar energy.

Pyrotechnics: produces torpedo’s and sea mines and a detonator with Batavian tears, uses fulminating mercury -aurum fulminarum- as an explosive.

"The idea of Drebbel as a universal wonderworker was as widespread in the seventeenth century as the idea of Einstein as a genius is today." writes Dr. Vera Keller in her dissertation ‘Cornelis Drebbel, Fame and the Making of Modernity.’  (Princeton University, Sept. 2009)

Drebbel writes the essays: ‘Miracle of the eternal movement / done by the Alckmaersche Philosooph Cornelis Drebbel/ etc. (1604 / 1607), and ‘’a short Treaty of the Nature of the Elements and why these are useful". 'Done by Cornelis Drebbel.In 1621 reprinted and extended with  ["A  clear description of the Quinta Essentia, never printed before. Plus a dedication of the Primum Mobile]. Drebbel’s books and ideas have a strong influence in his time. For over 200 years, reprints are published and read.

1994 Cornelis Drebbel; the first Alkmaar citizen on the moon, at 40,9 degrees latitude and  49 degrees longitude in the Clementine galaxy, a crater with a section of 30 km calls to Drebbel.

Contemporaries Ben Jonson (play ‘The Alchemist’) and Shakespeare (the Tempest), might be inspired by Drebbel.
The BBC devotes a broadcast to Drebbel.
Drebbel, personage in Harry Potter.
Startrek: His name is Captain Drebble. He travels the galaxy in his ship.

Text and ©: Hubert van Onna, Drebbologist and Chairman
of the Second Drebbel Foundation